Fair Fares is an advocacy group that focuses on keeping public transit affordable.

Fair Calgary Communityexpanded its vision to "Great transit for all" based on the principles for public transit to be affordable, accessible, connected, and convenient.

Fair Fares wishes to keep this site active for people to learn the history of Fair Fares and how the sliding scale and low-income transit pass work came to be.

For the latest information about the low-income transit pass, Calgary Transit does a great job updating how to get the pass-through Fair Entry and where to buy it.

Posted by Fair Fares Calgary at 7:35 PM No comments:

The Alberta government has renewed the $4.5 million partnership agreement to continue funding the sliding scale for the next four years.


If you are concerned about these increases we encourage you to share this with your City Councillor. The proposed budget changes may be released next week.

Link to report for Calgary's long term funding plan
Posted by Fair Fares Calgary at 9:04 AM No comments:

More than 60 people share their concerns, ideas, and feedback on how we can make "Public Transit"  great in Calgary that is connected, accessible, affordable and convenient.

As promised to share the raw data from the conversation.
16-page document set in PDF format
If you have difficulties accessing it, please let us know.

The Province renewed a 4.5 million operational agreement with the City of Calgary for the next 4 years. Provincial Announcement that the 4-year agreement has been renewed October 22nd, 2019.

There remains a 6.5 million shortfall to keep the sliding going in Calgary.
Many people spoke to the report requested by the Council on how the City can help keep affordable fares within the sliding scale sustainable.

The report was presented on Wednesday, October 23rd, 2019 to the Standing Policy Committee called "Transit and Transportation."

We wish to express our gratitude for sharing letters of support and for those who had the time to attend the committee meeting.

If interested, here are the October 23rd, minutes from the Standing Policy Committee (SPC) on Transit and Transportation (T&T).
The next steps are these recommendations still need to be approved by the entire City Council at a later date.

Minutes for Standing Policy for Transit and Transportation October 23rd, 2019.

Next Steps, Municipal Budget for 2020 and beyond:

1. Mayor Nenshi responds to the Alberta Budget and how the decreasing/delaying provincial funding impacts Calgarians ttps://calgaryherald.com/news/local-news/funding-for-cities-takes-a-significant-hit-in-first-ucp-budget

The Mayor also highlights the impact on capital projects and operations like the green line. "The city had been expecting $555 million for the Green Line over the next four years. Thursday, the province announced the city will be receiving just $75 million. The remainder of the $1.53 billion will come in future years, the province said."
2. We will be busy preparing for the Council budget which is tentatively scheduled for public input on Monday, November 25th, 2019.
Posted by Fair Fares Calgary at 9:44 AM No comments:

Calgary Transit was asked by City Council to explore different funding options to keep the sliding-scale going beyond 2019.

Posted by Fair Fares Calgary at 7:55 PM No comments:

Save the Date for Calgary's Transit Summit

Posted by Fair Fares Calgary at 10:57 AM No comments:


On November 26th City Council will hear submissions from the public on a number of budget related issues, including a $6 million funding request from Calgary Transit to fund the Low Income Transit Pass for 2019. This funding is required to maintain the current fare structure of the Sliding Scale


With the introduction of the Sliding Scale, the Low-Income Transit pass has surpassed all expectations of monthly pass sales, far exceeding the previous “one price” monthly pass. The program has doubled in size in the past two years.


Results form City of Calgary survey of customers in the fall of 2017 showed that a more affordable monthly pass shows:

Other important benefits of the Sliding Scale include:


Contact information for your City Councillor is found at:
http://www.calgary.ca/citycouncil/Pages/citycouncil.aspx

*Sample letter of support can be downloaded here

*Call to Action can be downloaded here

Thank you for supporting affordable transportation in Calgary.

Fair Calgary Community Voices is a group of organizations, community advocates and people experiencing poverty. We work with the City of Calgary to advocate for accessible and affordable low-income subsidy programs
Posted by Fair Fares Calgary at 12:11 PM No comments:

The City of Calgary is now planning its 4-year budget called "One Calgary" and we need the province to be on board beyond 2019.

We created a "Transit 4 All" site check it out. 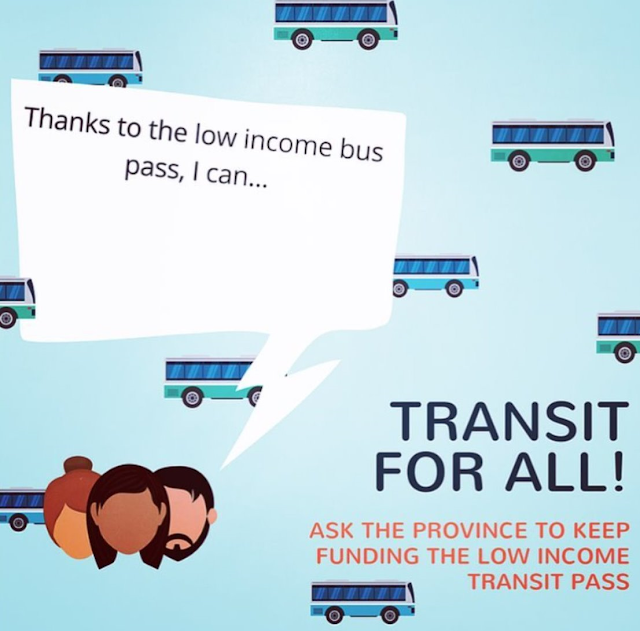 Posted by Fair Fares Calgary at 2:50 PM No comments:

Proud our City continues the commitment for affordable transit... how about Alberta?

We are proud our City has led the way for many municipalities to take a closer look at what is an affordable fare.
Affordable fares in Calgary mean ability to pay, in Calgary we call it the sliding scale.

We believe operational funding of transit is a cost-shared responsibility of all three levels of government.
We are crossing our fingers our province sees the benefits and renews its commitment to help Albertans address social isolation and access community.

Posted by Fair Fares Calgary at 2:09 PM No comments:

Here are three things you can do...

1.  Download the 'Affordable Transit Makes it Possible for Me to...' colouring page.

As you can see, it is quite a simple design that allows people to share their story.  Tell us how your life has been affected by the sliding scale other than just writing a letter. On the back side of the page, there is a list of other things you can do.
2.  Share your thoughts with City Council in a letter or call 311

Fair Fares wishes to congratulate Calgary Transit for its A+ grade as one of the best transit systems in Canada.

Since the introduction of the sliding scale enabling Calgarians living in extreme poverty, we are pleased to see transit experts rating our City as one of the best and we agree!

The article talks about how Calgary improved in areas of "Operating Cost Per Service Hour and Passenger Trip Intensity"  both improving from a B to A grade, as well as "Calgary is currently the region with the lowest operating cost per service hour at $152.89, in contrast to Metro Vancouver topping the list at $186.29, followed by Greater Toronto and Hamilton and Greater Montreal’s operating cost service hours of $178.61 and $180.2, respectively."


Lets hope the sliding scale model will be a trend for more Cities in Canada who make it a priority to ensure Citizens can afford to ride!


Posted by Fair Fares Calgary at 9:02 AM No comments: